TOKYO -Japan is known as one of the world's most rapidly aging societies, and the fashion show on Thursday proved the country's diaper producers are intent on keeping the elderly clean and dry. 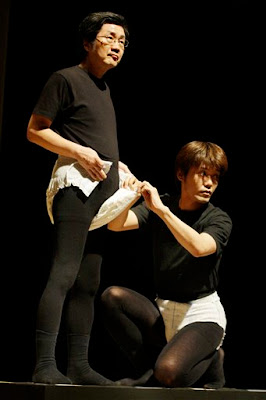 Before the models took over, players at the theater in downtown Tokyo acted out skits instructing viewers how to tell when elderly loved ones need diapers, how to convince them to put them on and how to properly use them. In one skit, an elderly man shook his head in dismay after his wife pointed out that he wet the bed overnight again.

The crowd of several hundred people included diaper manufacturers, nursing home workers and doctors. Like many events in Japan, the show was heavy on detailed information, showing how certain types of diapers suit the bedridden, such as models that can be wrapped around the midsection. Pants-like slip-on diapers, on the other hand, are more suitable for active oldsters.

It means a booming market for adult diapers! Indeed, adult diapers are an increasingly common item in Japan, home to one of the world's longest average lifespans. More than 20 percent of the population is over 65, and the country is forecast to have the globe's largest number of centenarians , 1 million , by 2050, the U.N. says.

"A lot of people make mistakes when choosing diapers," said Hamada. "We can make it so people no longer feel uneasy about taking care of old people."

"It was great to see so many different types of diapers all in one showing," gushed Aya Habuka, 26. "I learned a lot. This is the first time that diapers are being considered as fashion."

The Nikkei, Japan's leading business newspaper, conducted a survey this week that showed sales of adult diapers have more than doubled over the past decade, reaching an estimated 52.5 billion yen ($500 million) this year.
Posted by ★Jasmine at 10:21 AM

this is the first time I heard that diapers are being considered as fashion! haha ;)

me too,diapers are being considered as fashion, ehmm....!

not a good indicator for their economy though... large number of elderly means less numbers of abled workers

Please do add my other blogs youre already there.

ThaNKs a lot!
you can check it out if you want.

that's ridiculously funny show! you imagine that? since when did diapers became a fashion thing? hahaha! but that's pretty unique, though. and yes, the adult diaper business seems to be growing. i work for WalMart Pharmacy and our adult diapers section is one of the fastest sellers! yes, just like japan, canada has a high senior citizen population as well. especially in the city where we live... you can see more old folks hanging around in malls and parks that yuppies! hahaha! and they're all sipping starbucks or tim's! or grabbing a bottle of beer for the devil their doctors care! hahaha!