It's not fruit seasons and this fruit gone wild! Would you pay more for a male fruit over a female fruit?

Local vendors in Tiexi District of Shenyang, Liaoning, starting selling fruit “by gender” at the market, charging more for “male” fruits such as apples, pears, tangerines, watermelons, strawberries and tomatoes. 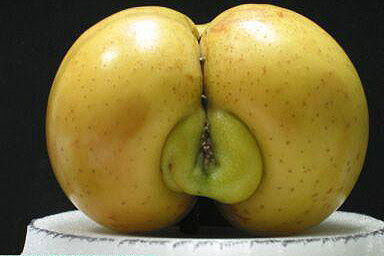 They would not say what makes some fruit “male” and others “female”, which prompted local officials to step in and stop the practice. They advised consumers not to be fooled by such a sales promotion.
Posted by ★Jasmine at 10:52 PM

as i was scrolling down, the image that first popped out below the screen's edge somewhat, well, looked like, uhhm, you know what i mean! hahaha! indeed... an apple!

enjoy the rest of the weekend!

wah..wah... its a nice and unussuall apple i think and perhaps had hight cost, how it could be like that ? genetic ?

This is a bit weird.

this is mind boggling heheh