My Fairytales :Here With Me:

"Living in a fairytale isn't all it's cracked up to be"

I went to school at 8.00 a.m with my brother for the Chinese Chess Competition. And we're the only Malays!!! I'm glad he be my companion; because Ulya can't come for certain reasons and i was dying inside to ask EVERYONE! i've even asked Alia & Dzaleha! ha! i couldn't believe myself either! Before the competion, which signing up, i met this guy wearing Bendahara clothes, he didn't join but he organized it. I can't elaborate more on his name but look,
HE IS MY SAVIOR-OF-THE-DAY! =p
really a nice guy o~! *blushing* he watched & helped me for the whole day! leng zhai some more! I'm really fortune! as for that, i really wanted to know, at lease, his name! (sadly, he don't have yellow tag..) ='(

Fantastic Friday! Whoopededooo~ fantastic enough, eh? Mr. Ong didn't come (although Friday don't have English class.. hehe), and we were lining up at the Foyer C for 45 minutes (2.30 p.m- 3.15 p.m!) usually we don't line up like a bullshit doing nothing. But, Pn. Rajinder told a day before to line up! And we were.. !@#$%^&*.. this is the first time of the year & we were !@#$%^&* but just imagine about other students from different classes!

They were DOOMED! not me/fatin but THEM! (we fought with Afifah) somehow there's a matter about History teacher as well as KKQ teacher. guys especially. & not forgetting the girls. Even morning session disipline teacher, Pn. Fauziah showed up in the afternoon session to lecture OUR CLASS! + BM teacher, Pn. Rabiah + Agama teacher, Ustz. Sulwani and I was disappointed (eventhough i know there's nothing to do with me.. but it does involves me as a CLASSMATES) ='(

It was a sunny day.. and English class! Mr. Ong!!! haha. I like him ♥, though there's a lot of THEM kind of ostracized him, but eh, who cares? I like him full stop. Since he's a practical teacher from UM so his lecturer came. his lecturer, Indian guy, kind of interested me ect. and that time Mr. Ong gave us something about promoting products. He did gave us pieces of newspaper to do. And we got CARS! "How can we girls know about it clearly?" asked my friends. (It's a group work) So, Indian guy came to me, (i think i'm the first student he came to) and asked warmly, "Do you know where is Hyundai came from? And my answer was, "Oh yes, it' from Korea) and he replied "Oh very good! Clever girl" and slowly walked away with his smile on his face. I knew it because i've been to Korea & have once heard from the agent that Hyundai is one of the most best sold cars, apart for that I got brothers whom are CAR FREAK! and proudly announce that i've been encouraged to LOVE CARS! *sometimes when there was only them and all i only hear is ALL ABOUT CARS and i think i'm getting INTERESTED now. =D 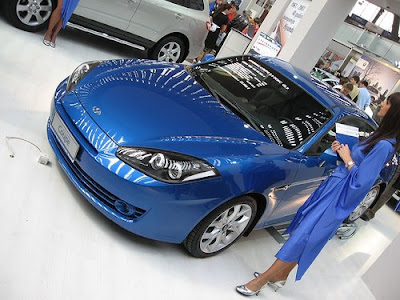 Hyundai Car
So, when the Indian guy finished and walked outside the class, Mr. Ong came to ME!!!! (my desk) haha! Me, myself couldn't believe it either! AND THIS IS THE MOST UNBELIEVABLE PART! "Thanks for the corporation" said Mr. Ong softly, unexpectedly with a smile + he's only 5mm from my face! and i got courage to say he'd only thanked me [?] XD

Email ThisBlogThis!Share to TwitterShare to FacebookShare to Pinterest
Labels: my fairytale